Less than 4 weeks after the 200.6 mile race in Tahoe,  I flew out toArkansas into Little Rock.  There Spencer and I rented a car and went to the race registration packet pick-up in a town called, “Perryville”.   This has been the first time I have ran another 100 miles with only three weeks of recovery from my last race.   This race also is extremely hilly, parts of it are in the Ouachita Trail and National Forest.  It has very long ascents and descents with the terrain being very rocky.

We did our preparations for the race and went to the hotel to sleep.  With a start time of 0600 I wanted to be in bed by 2100,  and so I was!  Spencer and I made it to the start line  at 0500 and received my number.  The race director made a point to introduce himself to me and welcome me.  That was very nice and made me feel good as a runner.  At every race it seems you always have one person that wants to tell you all the negative aspects of the, “could-be’s”.

In this race one man came up to me and told me he was from Kentucky and had ran the race seven times.  He then told me look up if I stop to use the bathroom because you have to  watch out for the bow hunters.  He said a  girl got shot by an arrow in the leg last week from one of them.  He also told me the black bears were thick out there.  {Just what I wanted to hear after I was charged by a mother bear in Tahoe}.

Then he started to tell me it was going to be in the high 80’s out there and things I should do to tolerate the heat.  After about 10 minutes of this Spencer interrupted him and told him I ran Badwater two times and know how to handle the heat!  We then thanked him and moved away!

The race began!  The hard runnable hills that challenge you from beginning to end never stopped!  The crew at the aid stations were incredible and it was so well marked!  The volunteers wanted to help you as much as they could and were happy too.  They really were incredible and I felt lucky to have them!  I saw three bow hunters but none of them bothered me or shot at me!  I did not see any bears.  I did see a baby skunk but I was able to run fast to get away from it.  The spiders were large and many!  It rained for about one hour but a soft drizzle at night.  The weather was 88 degrees during the day and never fell below 50 degrees at night.

I finished the race 25:33:29,   5th overall female,  28th overall racer out of 162 starters.  The buckle has a picture of a female ultra runner.  Told to me by the race director that it was a copy of, “Ann Trason’s sillouette “, a very well known and established ultra runner.

Was it enough recovery time from the last race?  NO. But I am happy and grateful on how I did at this hard challenging race. 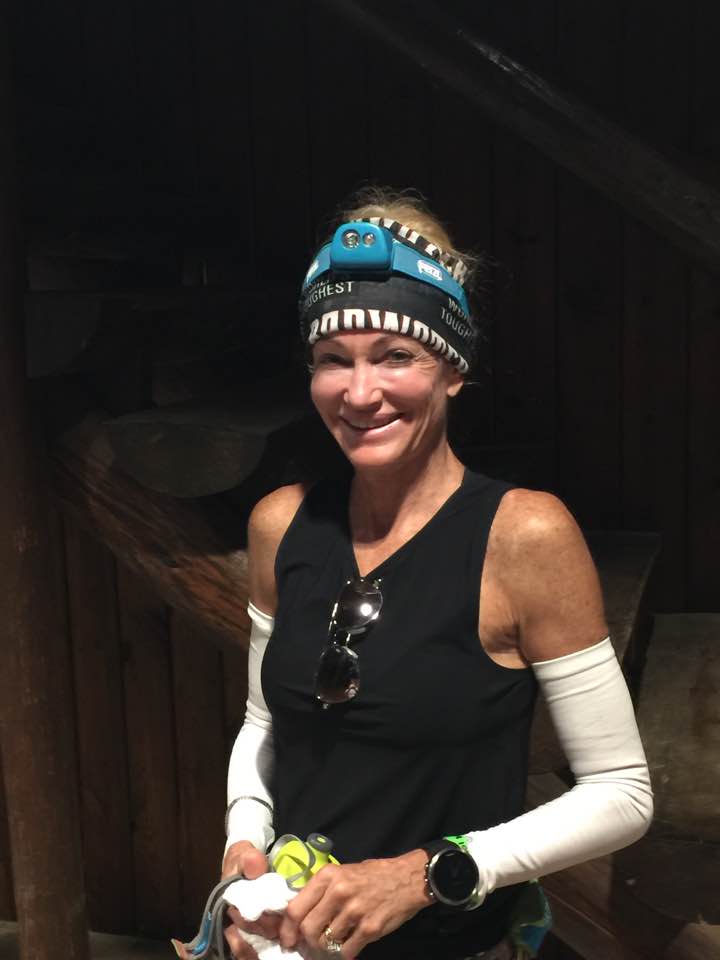 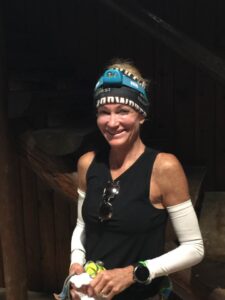 Waiting for the start of the Arkansas Traveler 100 miler 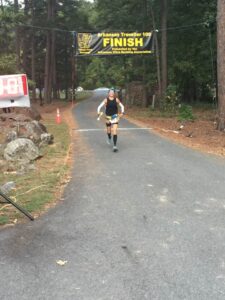 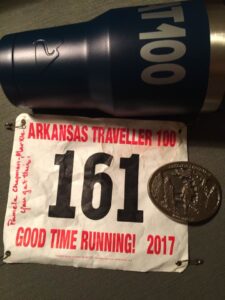 162 started the race. 77 finished before the cutoff of 30 hours. Pam finished 5th woman and 28th overall while crushing the old age group record by 2 hours. 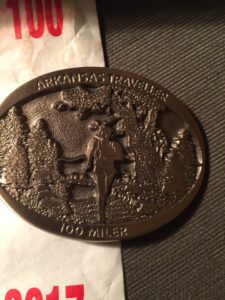