Filling out the application I was so excited this time in January has finally come!  I had met the director, “Chris Kostman”, three years ago at the Florida Keys 100 mile race.  At that time I told him I was going to run his race when I turned 60 years old and beat the record. He smiled at me and said, “good luck”!  I had found him charming, dedicated, and extremely organized which I came to admire.

A few weeks later I found out I was excepted to the race!  I was so excited!  I grabbed every article and book I could find to read about the race and see what could help me out.   I live in Texas and the heat here is over 100 degrees so I thought running in the hottest part of the day would help acclimate my body.  I also had put a dry sauna in my home and decided to use that to also help with the training.  I tried to get into the sauna 3 to 4 times a week.  Chris has an article on his website for heat training which I found very helpful.

The next thing was picking a crew to help me in this race.  This was mandatory and I never had anyone crew me before except for Spencer my husband.  I decided I would ask the two people I ran into in Brazil several times during that race that, “just happened to be there and help if needed.  They are Jarom Thurston a well known ultra runner and his close friend Andre Nader.  I phoned Andre and asked him and also contacted Jarom and finally a few days later a plan was in the mix.  Talk about a blessing for me!  These two guys had crewed badwater135 more than one time before so they were totally experienced which is what I needed!

The final day came and Spencer and I flew to LasVegas where we rented a car and proceeded to the hotel to wait to meet up with Jarom and Andre.  When they arrived we went to dinner and the plans were laid out.  The next morning we went to the grocery store and picked up what food we felt we needed and proceeded to the state park of, “death valley”.  We arrived and checked into our hotel and got settled for the meeting  that evening.  There we saw one hundred excited ultra runners ready to start the venture the next day.  The meeting was organized, well constructed, and positive to the staff and the crew.  I was ready.

The race started at 20:00 in the evening.  I wondered how this was going to affect me because I do not do well missing sleep.  I was going to go threw two nights with no sleep and that was a concern of mine.  I also was not feeling up to par because I was having huge thyroid problems which started a few weeks before the race.  I had been advised not to race, and go to the emergency room.  My heart rate was double my normal with several extra PVC’s.  Being in medicine all the years I have, I knew it was my thyroid and the heart was just the secondary reaction to the problem.  I was not going to let this opportunity go.  After all, this was such a dream for me.  I live to run.  Only an ultra runner understands this.

It is a passion that is so strong and a burning in my spirit that pulls me into the freedom that running gives me.  It doesn’t matter of the age you are, the sex, the position in life you hold, or the country you are from.  It is a building of the spirit that quiets your soul and leans on your God to carry your body threw the worse conditions in life that has been challenging you.   Badwater135  was something I wanted to accomplish for myself.  I went off all my thyroid medication and in three days my PVC’s had diminished.  I was feeling crappy but safe.  So I proceeded to the race and decided to get to the doctor when I finished and came home.  Besides, I have not ever run a race were something did not go wrong!

The heat was so different than Texas humidity heat!  It felt even at 20:00 that 5 people were blowing hair dryers on me and the heat was still 120 degrees even at the late hour.  The first 15 miles were challenging to me more than usual.  My leg muscles were cramping so much.  When I met up with my crew Andre made me lay down were he massages and trigger pointed all the spasm spots.  That made me feel so much better.  The night run was slow but steady.  I did everything requested of me by my staff.  Finally, the 42 miles were finished and I was able to have a pacer!  Yeah!!!!!  I picked up the speed and proceeded throughout the day.  Trying to stay hydrated and making good progress until the sun came down again.

I was extremely nauseated and knew my electrolytes and hydration was not up to par.  With the help of my crew I managed to  hydrated and attempt to catch up with electrolytes all the delirious thoughts in my head.  After completing almost 30 hours of running my pacers were spent and I told them to get in the car and sleep.  It was once again up to my husband and I to toll the line.  He had stayed up the two nights with me driving the entire way and I needed him to cover me running at night.  He did not let me alone but every two miles I caught up with him and I let him sleep.  By the time the sun came up again i had renewed my spirit and I was almost done!

Andre and I headed up and the mistake I made was shoeing off my support crew.  Andre told me to fuel but I felt I would hurl with anything else in my stomach.  Big mistake………..one 2016 you should learn is too listen to your crew and do what they tell you because your brain is too challenged to think properly.  I made it with Andre’s wonderful influence and finally saw my husband and Jarom so I knew the end  was close.

We all ran together to cross the line at the Badwater135 2016 race where Chris Kostman was there to hand me the,”Buckle”.  I had beat the previous record by three hours of a 60 year female.  My time 41:02 .  I can tell you I was the happiest girl around and could not have done it without the crew of Spencer, Jarom, and Andre.  I felt so grateful and blessed.  That is what ultra running does for me.  It is a making of the body and soul to constantly do better on this earth.

To sacrifice your comforts in this life and know that the spirit takes a much larger place in your body.  It moves you through even the unimaginable places on earth and puts you on the other side.  Would I do it again?  You bet!!!! 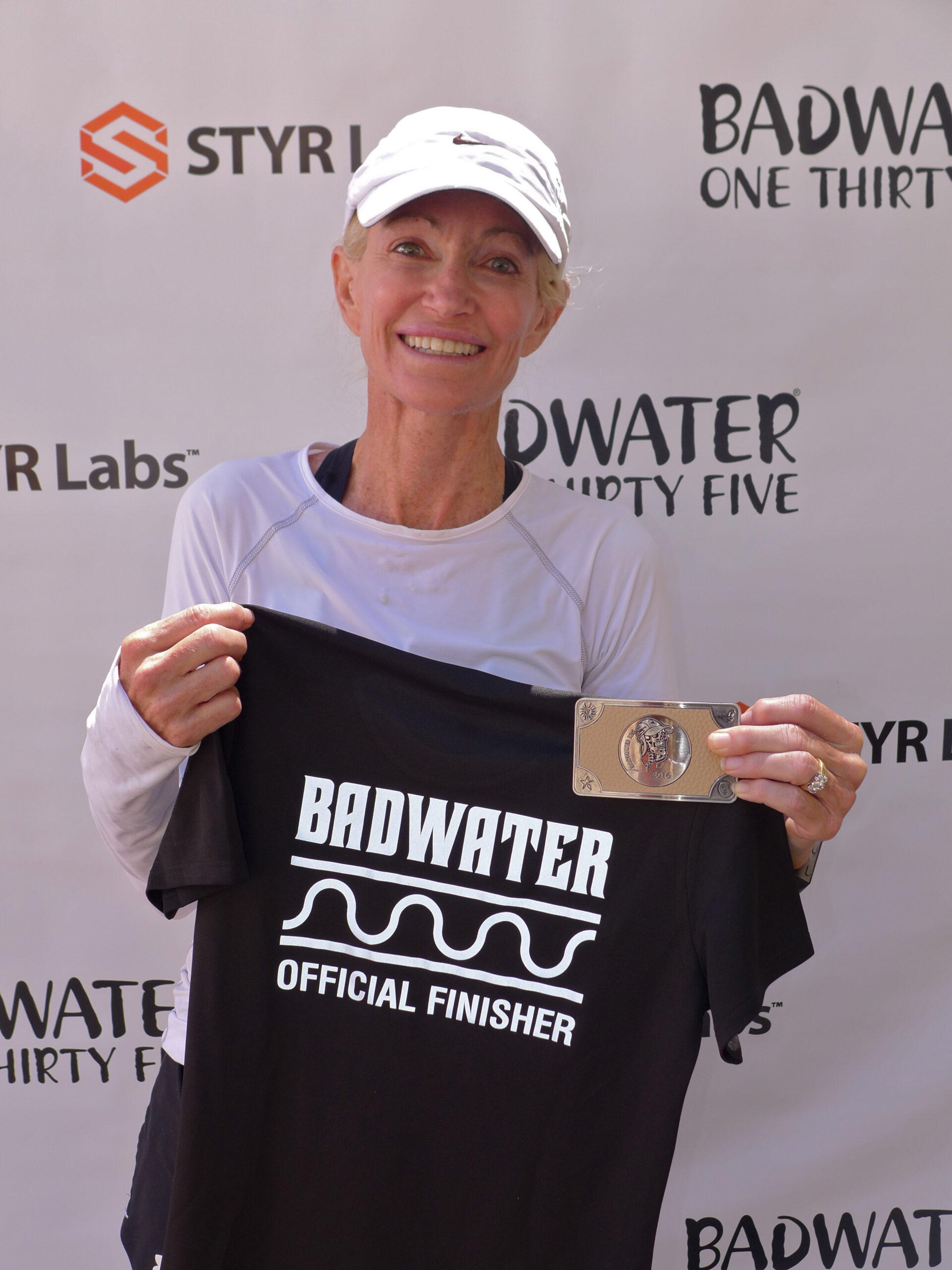 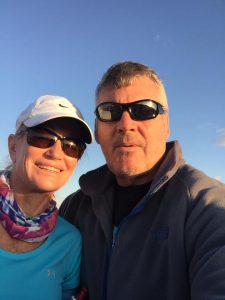 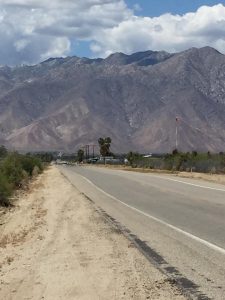 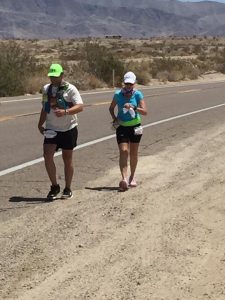 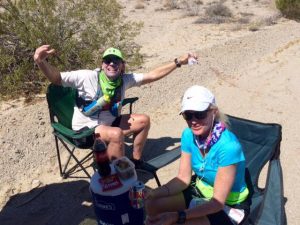 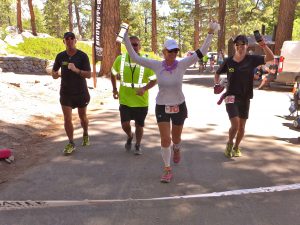 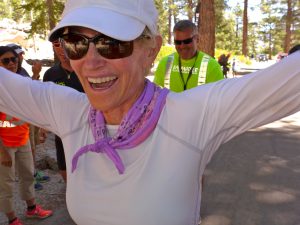 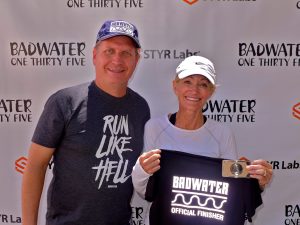 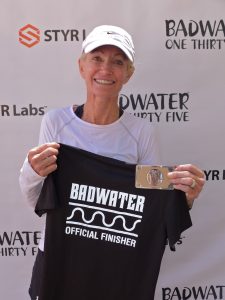 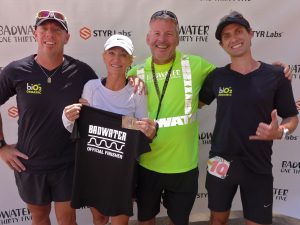