The, ” Styr Labs Badwater 135“in Death Valley is said to be the hardest foot race in the world.  I was honored to be chosen by Chris Kostman again this year to join the,”Badwater family”, and compete in the race.    This year, I felt like part of the family!  I wanted to repeat this race to attempt to break my own course record that I beat last year by over 3 hours.   My goal for this race was to beat my own time.   I was not at my best health  last year and so I wanted to give it another try!   I had my previous crew with me and an added, “Bonus” crew/pacer Heath Thurston.  Heath is Jarom Thurston’s brother.  He is a professional triathlete and a welcomed addition to our team!  Once again, Jarom, Andre, and Spencer were along for the race!  I felt confident going into the race with the very best crew ever!

As the race started the temperatures were registering 120 degrees with humidity of 28% and the dew point of 30.  This was at eight p.m. my start heat.  I felt it was cooler than last year but not sure if it was because physically I felt better or if it really was cooler!!!!  Training in the Texas heat did help with the heat training!

Off I ran in the night!  Being 61 years young, my night vision isn’t as good as it was when I was 40!  Nevertheless, head lamp on and one spare in my pocket I was off!  After 42 miles, you can have a pacer.  I ran until the early morning and picked up Heath to pace with me!  My time splits were minutes better each check in I had.  On the down hills Jarom Thurston got out and paced me in his sandals!   I thought, I cannot wait until I can do that!

How gentle he directed me to slow myself down and save my quadriceps!   I remember looking at the desert and not really noticing how beautiful it was last year but this year it stood out.  The entire race was breathtaking and very emotional for me.  It was just beautiful!   The second night Heath took a picture of the sunset over Mt. Whitney with me running backwards!  It was the most serene landscape with a sunset made just for me!   I hydrated and ate what I could mostly fueling off of Bio2.   Andre Nader was overseeing my fueling which is a sports nutrition food that sponsors me from Brazil!  They are really good with their products!  Andre also has a,” phd ” in exercise mobility so I had all my bases covered!

I had no idea how well I was doing compared to other runners because I Always Run My Own Race,  but I knew I was going to beat my time from last year.  Then came the dreaded diarrhea at mile 122.  ugh!!!!!!!  I could not understand why I was slowing down and everything went threw me like water!   I finally realized it was a salt pill I was unfamiliar with and very sensitive to one of the nutrients in it!   I finally stopped eating and slowed way down.  That is where my crew took over and cooled me off, allowed me to sit for 10 minutes, and  I change my clothes.   This all lasted about 4 hours!!!  I believe they got a little annoyed /frustrated with not knowing what to do so they then put Spencer {the driver, my husband} out of the van and said to him, “you walk with her a bit.”  Spencer always knows what to say to stimulate my senses!   He knows me better than anyone!

After a mile, he got back into the van, I was pumped and primed and found my second wind!  I  was ready to run into Lonepine!  There I ran into Dave Krupski.  An avid ultra runner/awesome coach  {Team Zwitty}  who told me how well I was doing!  He said I was going to be the first female to cross the finish line!  {There were 3 starting times}. REALLY????  We all were amazed!  I was so excited and thought I might place 10th overall female!  Wow oh Wow!   Climbing up Mt. Whitney was the last 13 miles.   I looked at Heath and said, “are you ready?”  Hell yes!  was his response and away we ran!  Six miles we were up in no time and then the mountain got extremely steep.  Spencer went back to McDonalds and purchased breakfast for us and met us up the mountain.  I had not had anything to eat for 7 hours.  It was the first time I had solid food for 7 hours and never knew it could taste so good!

Fuelled and feeling strong Andre was replacing Heath and away I went.  Finally, finishing strong at 35:48 beating my record by 5 hours 14 minutes from last year and coming in 3rd overall female!

I am very blessed!  I loved the race again this year!  You are as Good as you Crew!  I OWE So MUCH to them!  THANK YOU CREW!  Thank you Chris Kostman!  Thank you volunteers!

Most grateful to all of you! 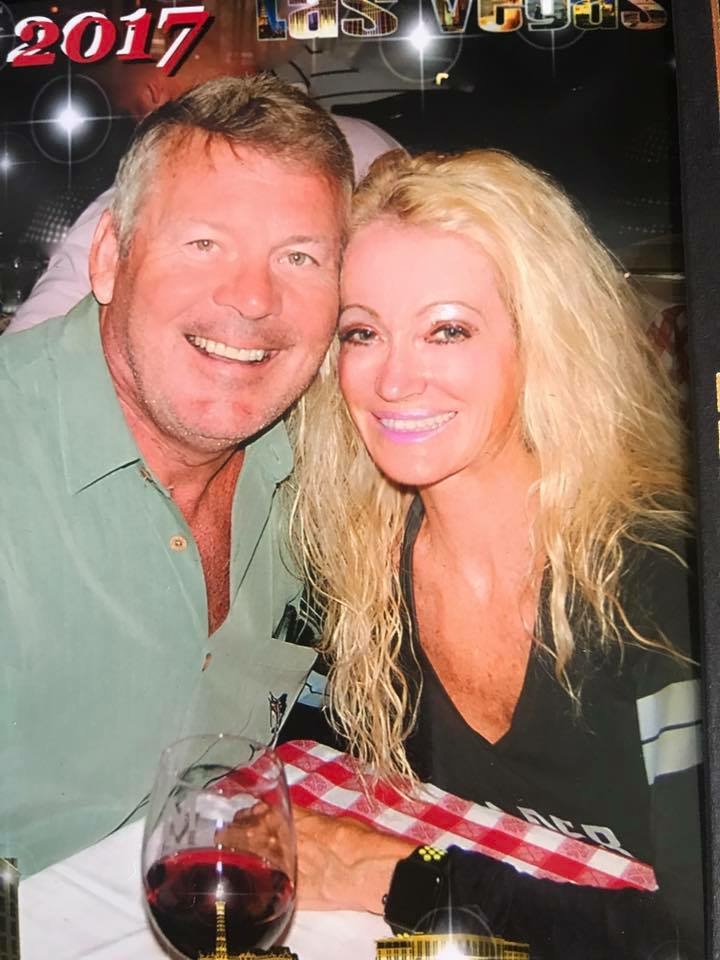 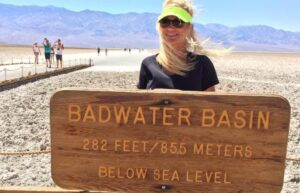 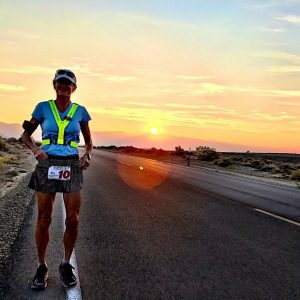 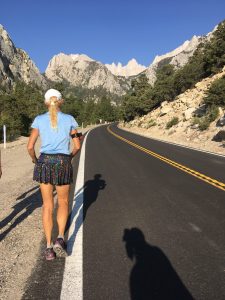 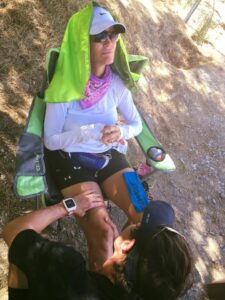 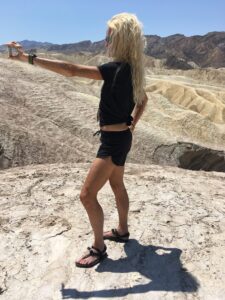 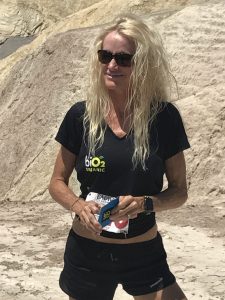 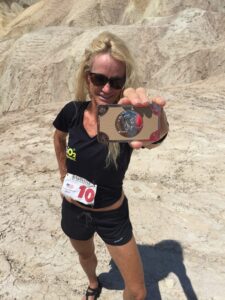