Story and Photos By Spencer Markle

With little understanding of the hydration, nutritional and electrolyte demands of a 100-mile ultramarathon, Pam entered the race. The temperatures dropped to the teens during a record-breaking cold front. Severely hyponatremic and vomiting, she suffered a stress fracture of her right tibia by mile 80 and limped home (literally) with a finishing time of 28:45. It was the hardest thing she had ever done, but she was hooked.

Growing up in Flint, Michigan, Pam was an excellent student, athlete and singer. “I worked hard in school and always paid attention to my health and diet.” Pam received a full music scholarship to the University of Michigan. However, tragedy stuck when she was just 19. “I was diagnosed with cancer and given six months to live. When I outlived the diagnosis, I was told that I would never be able to bear children; which made me want them all the more.”

In addition to becoming a certified registered nurse anaesthetist, she gave birth to three daughters and raised them as a single mother. “I worked six days per week for many years to make sure that all my girls would be educated.” Running several miles every evening after a long day in the operating room became her escape. The hard work paid off. Two of her daughters are now registered nurses and one has a PhD in education. All are married and have children. “I have 4 grandsons and my youngest daughter is now pregnant with what I hope will be a little girl.”

After her children finished college and began lives of their own, Pam looked for things to fill her life. She rode a Harley on weekends with friends. She became a licensed sailboat captain. She learned to surf in Costa Rica. Then came the 100-mile Rocky Raccoon.

The next challenge was a return to where it all began, the Rocky Raccoon 100-miler in January 2015. Crewed only by her husband, Spencer (whom she married in 2012), and without pacers, Pam posted a 26:56 finish, besting the 13-year course record for a 59-year-old female by 24 minutes.

By the fall of 2015, as she turned 60, Pam had completed 10 ultra-marathons and was ready for a new challenge. “I decided to apply for the Brazil 135 in January and my husband thought that I had lost my mind.” The Brazil 135 is one of the hardest and most exclusive races on earth, accepting only 50 applicants each year. Called “Brazil’s Badwater” by Trail Runner magazine, it is marked by rugged terrain and unrelenting steep climbs and descents. With over 30,000 feet of climb and 28,000 feet of descent on a dirt trail, Brazil promised to be a difficult and challenging race for even world class ultra-runners. Much to her delight, Pam was selected to run in the 2016 race.

“We showed up in Sao Joao da Boa Vista, Brazil, for the pre-race meeting after driving 216 kilometers from Sao Paulo. Some runners had crews of six with two vehicles. Everyone had pacers, mostly multiple pacers.” Pam had only her husband, Spencer, and one vehicle. Neither spoke a word of Portuguese, and as was her custom, there would be no pacers assisting her in the race.

“There we were,” she continued, “this 60-year-old couple with no pacers, no help and no interpreter and we were fixing to go 135 miles through the mountains of Brazil; me running and my husband driving all the gear, hydration, nutrition and our luggage.” The other teams looked at these two senior citizens with equal parts pity and disbelief. “You could tell that everyone thought we were in way over our heads and would soon be out of the race. Absolutely nobody took us seriously.”

Making the race even more difficult was the fact that a key bridge along the course was washed out and the support vehicles were forced to detour through five small towns before rejoining the runners on the course. What this translated into was a five-hour period during which Pam ran alone with no support. “What made that even more challenging was the lack of any aid stations. I had to depend on villagers and farmers for water. It was tough.” Still Pam persevered.

The race course follows the Caminho da Fe’ or “path of faith,” a cherished Christian Pilgrimage for Brazilians. “Through all the difficulties, there was such beauty in the rugged landscape. The stars blanketed the sky at night. The local people were kind and generous. It was a spiritual awakening for me like nothing I had ever experienced.” Pam ran on. She crossed the finish line at 3:42 a.m. of the second night, 43 hours and 42 minutes after the start. Of the 51 runners who started the race, Pam finished 15th overall and set a new record for a 60-year-old female by more than three hours.

Shaking her head, she said, “Looking back on what we did, no pacers, no interpreters, we were maybe a little bit nuts, but it worked.” Her incredible finish gave Pam the courage to seek new challenges and she set her sights on the Badwater 135. The course record for a 60-year-old female was 44 hours. “I was bound and determined to break the record. Our mantra was, ‘If we can do Brazil, we can do anything.’”

Pam’s application was accepted and after the tune-up of Badwater Salton Sea, where she and her partner finished the 81 mile course in 22:29, Death Valley was next. Although what Pam had accomplished in Brazil with minimal support was nothing short of amazing, she and Spencer had learned their lesson. “We were not going to go to Badwater as ill-prepared and clueless as we had in Brazil, plus race director, Chris Kostman required runners to have a crew of at least two people.” So Pam recruited two friends she had met in Brazil to join the crew for Badwater. “Having a crew of three after running all those 100s without any pacers felt like such a luxury. But we knew that Badwater was called the ‘World’s toughest foot race’ for a reason. We wanted to be prepared.”

In the meantime, Pam crossed paths with legendary runner and coach, Lisa Smith-Batchen, who became her coach after Brazil. “She told me that I could be the best in the world over 60 if I committed myself to the process. That was all that I needed to hear.” Lisa put Pam on a six-day-per-week training schedule, including strength training, tire dragging and spinning class. “I began to feel stronger and my times were getting better,” she recalled.

July 18, 2016, Badwater Basin, Death Valley California, 8 p.m. Despite the hour, the temperature hovered at 124 degrees – 12 degrees less than the highest temperature ever recorded. The heat was searing. The 9 mph wind felt like a giant unrelenting hair dryer. “The heat was so overwhelming, it was surreal,” she remembered. “It was the most oppressive thing I have ever experienced.”

Starting at 8 p.m. meant that Pam and the other runners would run all night, all the next day, all the following night and into the third day. “Because we had been up all day before the start of the race, Spencer and I estimated that we would be up for close to 60 hours without sleep and that’s how it turned out.”

From the start of the race, Pam was plagued by gastrointestinal issues and felt fatigued, slow and sluggish. Staying ahead of dehydration and electrolyte imbalance was a never-ending challenge. Pam was alternately overheating and shivering. The other two crew members had assisted another runner the year before who had DNF’ed Badwater at mile 60 and now, after 22 hours while Pam laid on the desert sand covered in towels shivering, she overheard one of the crew express his doubts to Spencer about whether she could finish the race. Spencer responded, “You don’t know my wife. She will never quit. Just keep running with her and she will finish. We didn’t come all this way to quit.”

Pam willed herself on. After 123 miles, she entered the small town of Lone Pine, from which Mt. Whitney rose menacingly into the sky. From there the race is straight uphill; 12 miles of endless switchbacks, the heat rising from the pavement, melting the soles of the runners’ shoes. “I was so anxious to finish that we got behind on nutrition and sodium. I was starting to see things that weren’t there. I would look up the hill and see my husband waiting in the distance with water and I kept thinking he was race director Chris Kostman at the finish line.” Finally, the real finish line was straight ahead and accompanied by her entire team, Pam crossed it in 41:02:04, breaking the record by 2 hours and 58 minutes.

Pam is not intent on resting on her laurels anytime soon. She plans to run the three races of the Badwater Cup in 2017 and has been accepted to run the Tahoe 200 in September. “I intend to run races of 100 miles and more for at least another five years.” On her radar is Western States and the Spartathalon in Greece. When looking at this 61-year-old grandmother who ran six ultras in 2016 and will run at least seven in 2017, all the while working fulltime in the O.R. putting patients to sleep and bringing them back, the obvious question is, “Why?”

She smiles and says, “They said I would not live past six months when I was 19. I survived. They said I would never have children. I raised three. I want older women to look at me and realize that they can still accomplish whatever they set their heart and their mind to. I want to give them inspiration.” 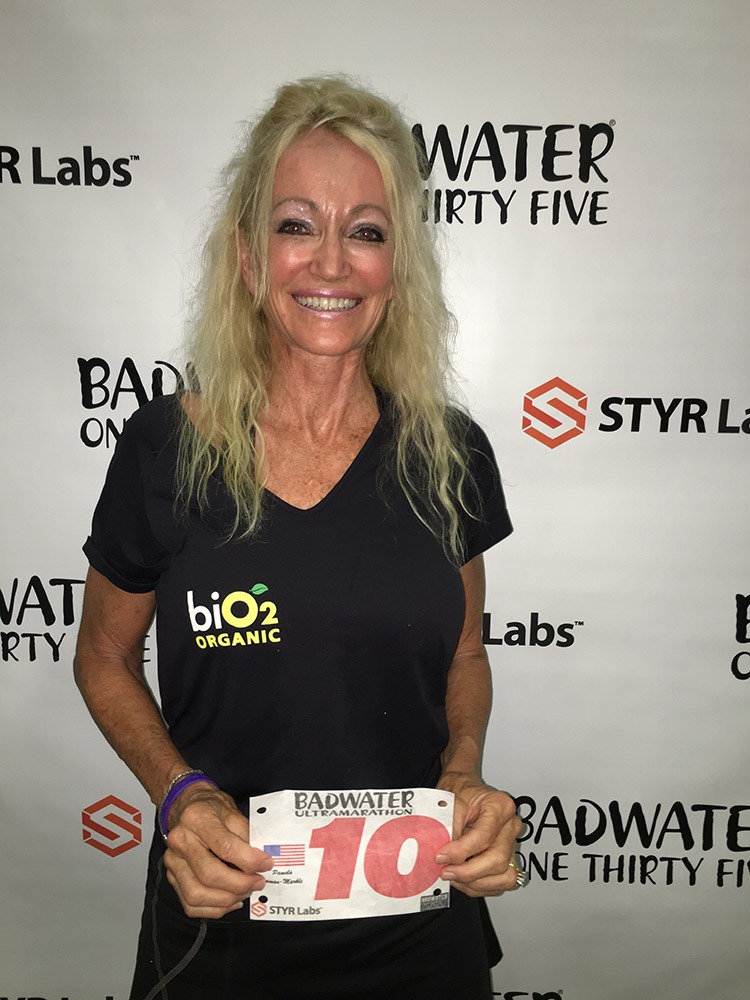 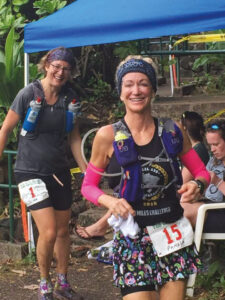 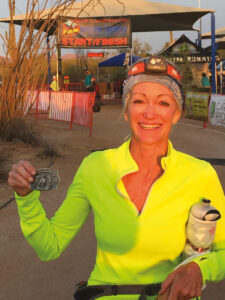 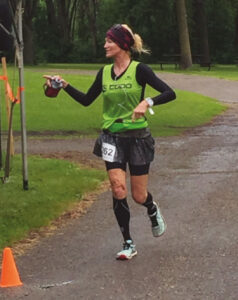 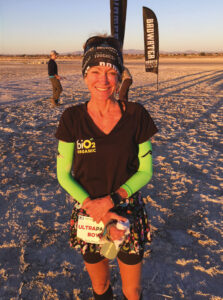 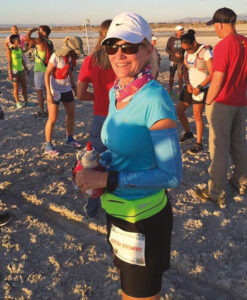 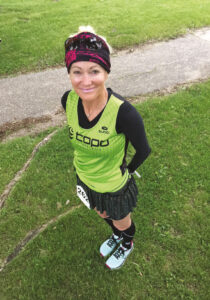